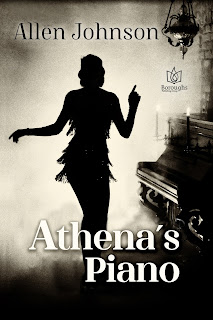 Tony Marco is a white present-day surgeon, musician, and Special Forces veteran. He appears to lead a perfect life with one exception: the inability to be at ease with a beautiful woman. A terrible secret has broken his spirit and shattered his self-confidence.

Then, through an antique magic-infused player piano,  he is mysteriously seduced by Athena Cruz, an extraordinary black musician from Harlem—a woman who is stunning, powerful, independent, and in mortal danger.

Tony and Athena share a common nemesis. His name is Cal Craven, a jazz club owner who will stop at nothing to destroy his challengers and feed his maniacal obsessions for respect and revenge.

The novel is proudly published by Boroughs Publishing Group.

"The story of Athena and Tony is one that will not be easily forgotten. Highly recommended as a love story, a thriller, and a book teaching us that sometimes, no matter what the year, humanity remains the same in the search for love.
—Susan Mac Nicol
Author of Worth Keeping
“Allen Johnson did a fantastic job. I will definitely be checking out more of Allen’s work in the future.”
—Brooklyn Ann
Author of Her Halloween Party

“Allen Johnson gives us romance, suspense, and the unexplained, and he does it masterfully.”
—Daisy Knox
Author of Go for Broke

“Allen Johnson’s story of lovers linked through a player piano, between the 1920s and modern-day is both ingenious and original.”
—David C. Dawson
Author of A Death in Bloomsbury

“This is an engaging story of romance, music, culture, and triumph that will keep you hooked right to the last page. Absolutely magical.”
—Jennifer Peer
Author of The Last Bloom
“Athena’s Piano hooked me from the start: the characters, the settings, and their love that connected them. This story has everything.”
—Kitty Knox
Author of Burlesque on Bourbon

Athena's Piano can be found in ebook or paperback format at Amazon.

In 1958, in a small, dusty southeastern Washington town on the banks of the Columbia River, three twelve-year-old boys—who call themselves the Terrible Three—are hungry for adventure. The greatest challenge of the summer is a dive off the Northern Pacific Railroad Bridge. The question is can they survive the plunge? 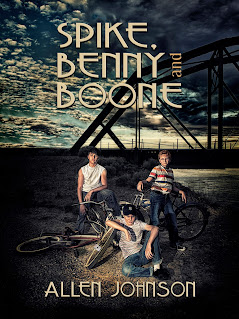 Their world changes when they meet an unexpected source of wisdom in the town hobo, David Albright, who calls a riverside grove of cottonwoods his home. Whenever the boys are in danger, Albright comes to their rescue, but can he survive the ultimate test of selflessness?

Forty-three years later, the Terrible Three are burdened by their own limitations, yet all are determined—with the help of their brothers—to become fully aware, genuine, and connected. Serendipity—or is it providence?—takes them to Paris and then on to the South of France where they meet romance, heartache, and a mysterious man who may very well change their lives forever.

"A tender and heartfelt story of friendship and spirituality. In the arc of this adventurous and fast-paced narrative, we watch three twelve-year-old boys grow slowly and fitfully into their best selves. Moments of wise mindfulness mix nicely with down-to-earth reality—and just a bit of magical realism."
--Sharman Russell, author of Standing in the Light

"By turns touching, funny, and wise, Spike, Benny, and Boone is a satisfying read for those of us struggling to make it through interesting times."
--Washington State Magazine


The Awakening:
A Novel of Intrigue, Seduction, and Redemption 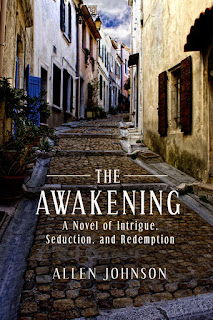 It could be that sanctuary exists in a sun-scorched village among the rolling hills of Andalusia, Spain.  Take a walk with the endearing patriarch of that village, Diego Garcia.  Step into his extraordinary life:  his childhood revelry, dancing barefoot among the endless
rows of olive trees; his passion for a courageous Moroccan beauty; his struggle with tyranny in the horrific war-torn streets of Granada, 1936.

Follow, too, the life of his granddaughter, Lupita, the feisty and exquisitely lovely physician whose competence is surpassed only by her compassion.

Then discover how these simple and noble people enter and influence the life of a stranger at the threshold of death, a man whose suppressed past is so scared by malice and deceit that he dare not be awakened.

"The Awakening weaves effortlessly through time, from the battle-scarred streets of Spain in 1936 to nearly 60 years later as it tells the life story of Diego Garcia and his descendants."


"The Awakening is one of those rare books that tugs at the heart while intriguing the mind. It is an elegantly written novel of the human condition."

Pardon My French:
How a Grumpy American Fell in Love with France

"Funny and insightful, Allen Johnson's love for the people of France
shines through like a warm summer day on the Mediterranean."

To make a friend is a joy.  To make a friend in another country through another language is a wonderment—a small miracle that makes the human connection even more precious.  Pardon My French follows the lives of an American couple who has embraced a daunting mission:  Not to be spectators of France, but to be absorbed by France. 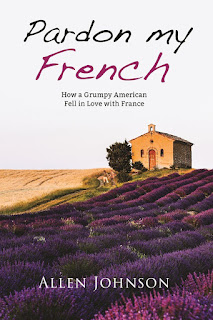 Follow the adventures of the author as he pits his rather staid and conventional driving skills against the French racing car speed demons of Languedoc.  Step into his sneakers as he tests his basketball prowess against the young French bucks adorned with backward ball caps and over-the-knee Chicago Bulls game shorts.   Watch how he frolics in the Mediterranean Sea for the first time with a French topless companion.  Listen to the sound of his voice and the brassy timbre of his cornet as he sits in with a world-class French jazz band.  Help him overcome his shyness in talking to the beautiful nude model from his painting class in the studio atop the village police station.  Envision how he learns to dance the tango with his head upright, his chest expanded, and his strides befitting a god with sensuality on his mind.


"Funny, sexy, smart. If I only had three words in which to tell you about the pleasures of Allen Johnson's Pardon My French, those'd be the ones."

Pardon My French may be ordered by clicking here.

The Power Within:
The Five Disciplines of Personal Effectiveness

The Power Within describes how the five disciplines of love, responsibility, vision, commitment, and service work together to generate personal, interpersonal, and organizational well-being.  The five disciplines are about action, what you can do to become more purposeful, more joyful, and more at peace with yourself and the people you love. 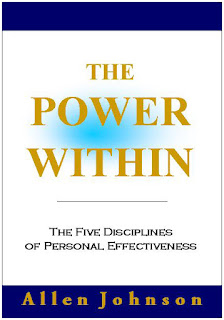 The basic assumption of this book is that we all have a power within—a wisdom that lies below the surface of our conditioning and prejudices, but often remains untapped.

How do we know such a power exists?  We see the evidence everywhere.  The childlike satisfaction of learning is the power within.  The joy of making the right choice in a difficult situation is the power within, as are the thrill of taking aim on excellence, the integrity of attending to what is important, and the rightness of serving those in need.


In effect, the power within is the power to derive joy from our life experiences, including our most difficult trials.  The fight-or-flight instinct rarely serves us well.  By employing the five, higher-order human competencies—insight, moral knowledge, imagination, independent will, and self-transcendence—we rise above the chaos and turmoil that assaults our lives.  We respond with a sense of human dignity.  Such responses distinguish those who cultivate and the power within.

“The Five disciplines of The Power Within can change your life.”