Christmas Then and Now

Today is my wedding anniversary.  Nita and I have been married for 46 years.  How can I describe those years?  At the beginning—say the first ten years—we felt that we needed to do everything together.  Nita through herself into realms that were foreign to her, just to please me.  She even tried to water ski—one of my passions—despite her fear of the water and her inability to swim more than three strokes.  If one of us needed to pick up something at the grocery store, the other had to tag along.  If one of us wanted to take a nap, it was no good unless the other cuddled in for a siesta as well.

Little by little that changed.  We slowly came to realize that we were two unique individuals.  Nita was not capable of satisfying my passions for music, theatre, and mountain climbing.  I would have to find other friends who would fill that void.  Likewise she was not going to find a great partner in me for her interests in birding, gardening, or hosting.

Some might call that divergence sad.  I don’t see it that way.  I think it was healthy for us to recognize that the other could not satisfy every need.  In fact, I believe that if I had demanded Nita’s participation in all things, our relationship would have been stripped of its longevity and affection.  We both needed our individual interests to flourish on their own.

Today, there are very few passions that Nita and I have in common.  What we do have in common is a level of comfort and a high appreciation for the talents and proclivities of the other.

There is something else that I have noticed in later years.  We rarely argue.  It is as though both of us have recognized that it is not essential to be right—and that our spouse has the absolute right to believe as he or she likes.  For example, a couple of days ago I asked Nita this questions:  “On a scale of 1 to 10, how assured are you of an afterlife?”  She said she was a “10,” that there was no doubt.  I’m a “1” on that question, but it doesn’t seem to matter—not to her and not to me.  The understanding is simply a point of information, not a point of contention.

I’m a lucky man to have found a woman with so much compassion and understanding.  I selected well.  I’d like to think we both selected well.

A Christmas Concert
A musician friend of mine, Debi Eng, asked me to be the narrator/street musician/comic relief for her middle school and high school Christmas choral concert.  The event was held at the Kennewick Washington High School auditorium.  We had two performances, and they were both enthusiastically received.  The kids performed beautifully.  There were 130 students on stage for the entire two-hour show.  Amazingly, they were quiet and focused throughout (although I did see one girl braid her hair at one point when her choir was not singing—ugh).
At the end of the show, I told the audience that I wanted to share two photos from my family album.

This is what I said on showing the first image: 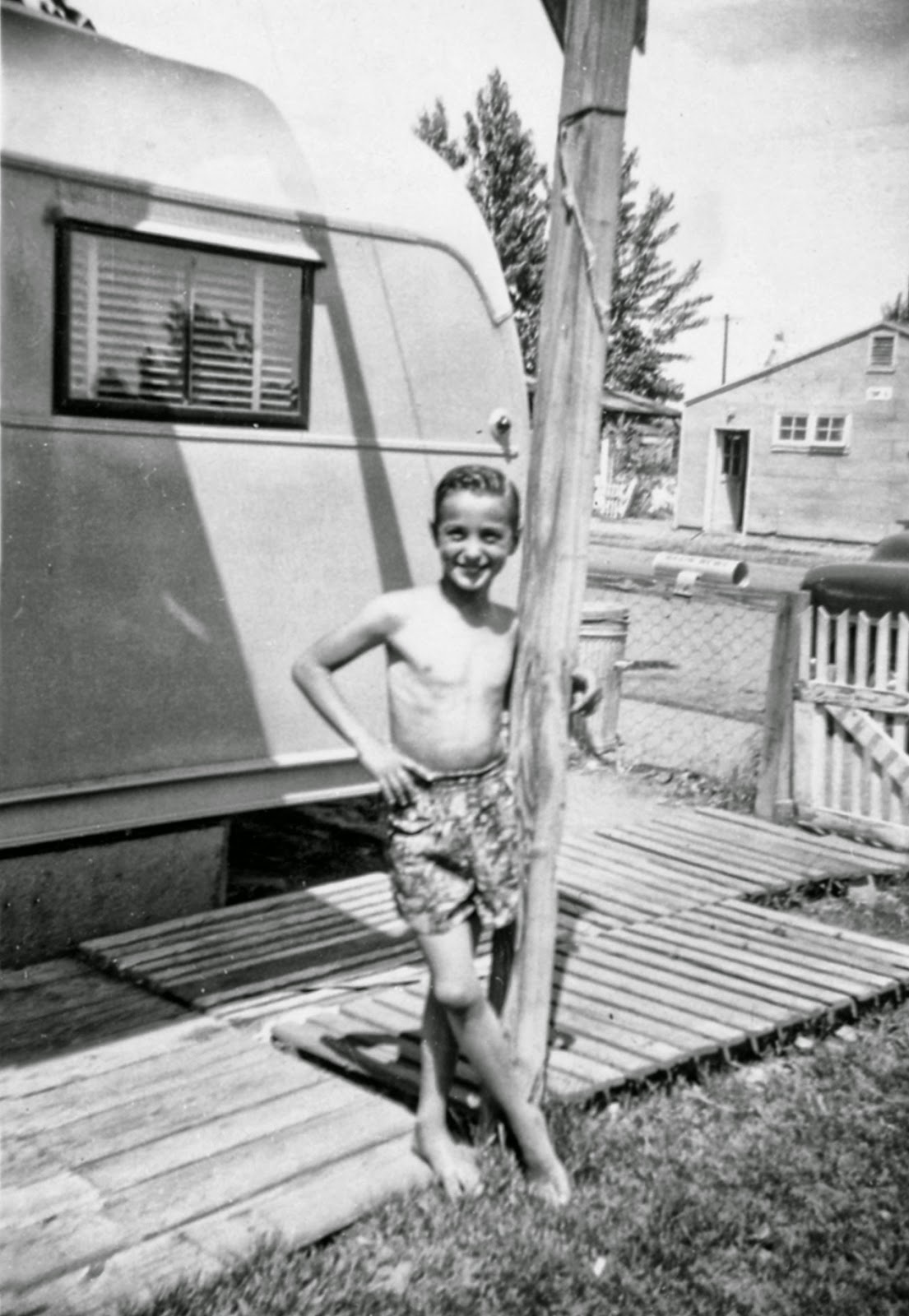 “This was me in 1955.  I was nine years old.  For you who are doing the math, I’m now 68.  The location was the North Richland Trailer Court.  Our home was a 24-foot trailer.  The bathroom was across the street in the washroom, which made for frigid dashes in the middle of winter nights.

Look at those knobby knees.  I look like I was sired by storks.”

At that point someone whistled, so I strutted around on stage and said, “Yep, that mighty physique has not changed much over the years.”

The second photo I shared with the audience was taken on Christmas morning.

“This is the inside of our trailer.  What you see was the full width of our home.  I’m not sure, but I think the little Christmas tree on the right was a tumbleweed with tinsel.  The couch behind me opened into a bed, where my brother and I slept.”  I drew an imaginary line.  “You cannot cross this line.  This line is no-man’s land.  You cross this line and I’ll turn you into a grilled ham sandwich. 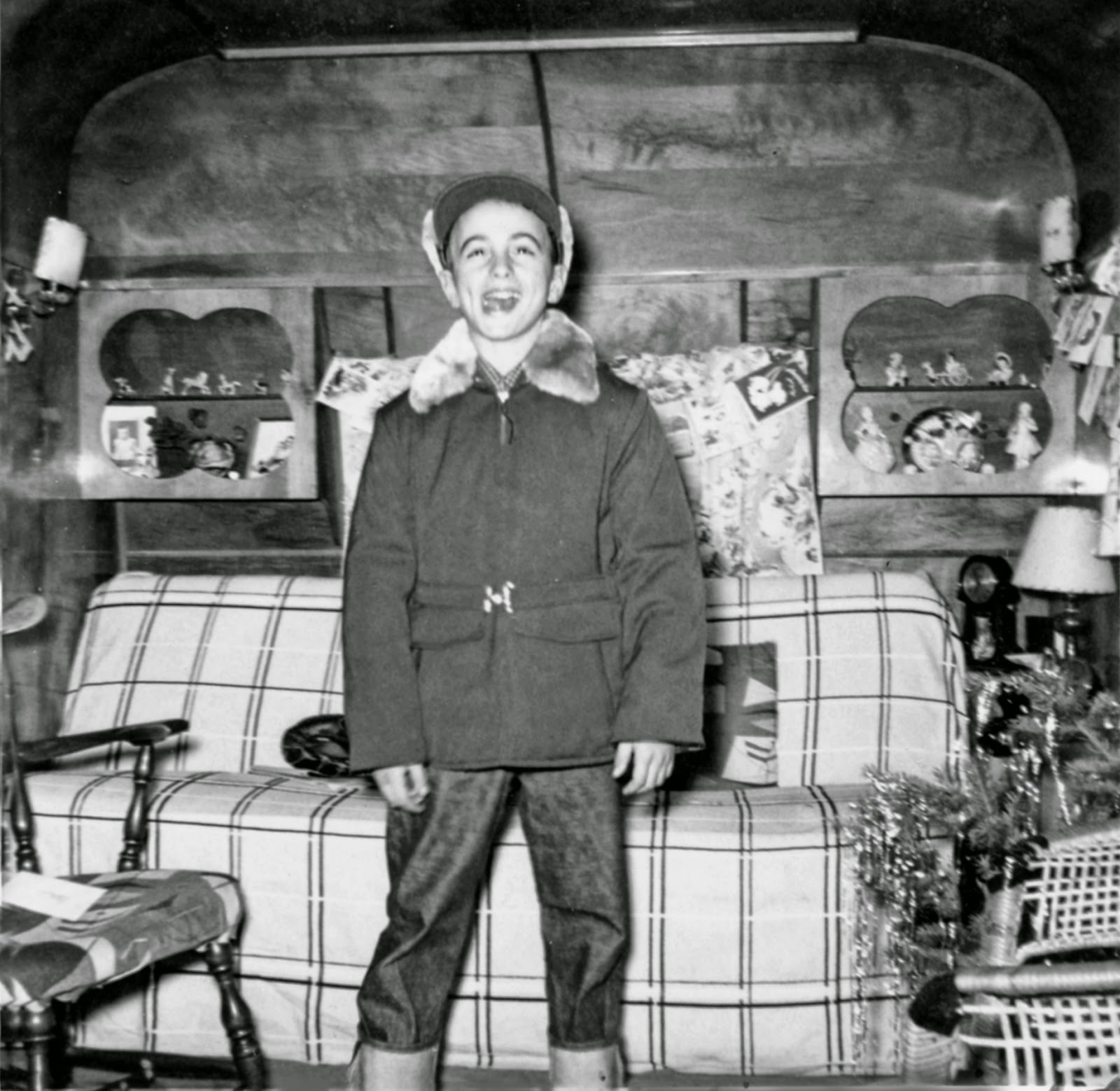 “I was wearing the full extent of my Christmas—my winter jacket and my blue jeans—which I thought was pretty extravagant.  Note that the jeans were turned up eight inches at the cuffs to account for growth.  I think I probably blew out my knees before I grew out of those jeans.

“Here’s my point:  Look at that smile.  I could not have been happier.  I had love and that was all I needed to sprout into the magnificent specimen you see before you today.”

At the point the 130 choir members erupted into spontaneous applause, hoots, and whistles, which drowned out the already enthusiastic response from the audience.  The kids could not imagine what that expression of affection meant to me—to be recognized, to be loved, to be drawn out of the shadows of invisibility, where old men too often reside.   It was the sweetest sound ever.  “Oh, cut it out,” I quipped to the kids.

I wrapped it up with, “May your Christmas be a joyful celebration of hope, peace, and thanksgiving—but mostly a celebrations of love.”

That was Debi’s cue to launch into a rousing, gospel-like version of the “Hallelujah Chorus.”

Posted by Allen Johnson at 3:49 PM No comments:

A Call for the Implacable Struggle against Injustice


The fight against injustices must be as indefatigable as the pursuit for national character.  The effort must extend beyond a lifespan; it must be multigenerational.  A quick review of history underscores my point.  The end of slavery, the abolishment of child labor, the victories of suffragists and civil rights advocates:  These outcomes did not come overnight, but through generations, even centuries of tenacious and deliberate hard work, the next generation building on the small victories of their progenitors.

Many of these social advances are still inchoate.  Children are still enslaved in underdeveloped countries, fettered by despotic corporate greed.  Women may have earned the right to vote, but their brain power is still underutilized and their efforts underpaid across the landscape of commercial and governmental agencies.  And social injustices are still blamed on the victims of poverty rather than on the heavy hand of plutocracy.

How easily we are duped:  To allow our brains to be anesthetized by the unctuous diatribe of special interests, all of whom are driven by one overriding motivation, financial gain.   Partisan politicians and news entertainers (I will not call them journalists) have opted to keep us sedated and diverted from the real issues.

Do not be deceived.  The world is not as tidy as they would have us believe.  There is still a panoply of social issues yet to be denounced and challenged.   One of the greatest is economic inequity.  The Pew Research Center reports that 41 percent of the global wealth is now in the hands of less than 0.7 percent of the population. That means that 99.3 of the earth’s inhabitants must make due with 59% percent of the pie.

I am outraged and frightened by these numbers.  If the gap continues to widen—and I see no reason why it should not—I foresee a global revolution.  Some believe it is already happening.
I implore all of us to be guided by our historical champions for social justice—the Quaker abolitionists of the 17th and 18th centuries, the suffragists of the 19th and 20th centuries, and all of today’s advocates for social and economic equity.  Stand up and allow your voice to be heard.  Are you appalled by the rising tide of poverty in our country (15.1% according to the 2010 US Census)?  Are you dispirited that women account for only 18.7 percent of the 113th U.S. Congress?  Are you mad as hell that the income for the bottom 90 percent of the American population has remained flat since 1980, while the income for the top 10 percent has skyrocketed?

If you answered yes to any of these questions, standup and be heard, not just for today, but through the end of your days, and on to the next brave generation, and the generations beyond.  For if we are paralyzed by apathy, if we do not voice our outrage, the world will not become stagnant (stagnancy would be a blessing).  If we are ruled by apathy, the world will fall into moral decay and crumble under the horrific burden of greed.


Posted by Allen Johnson at 7:13 AM No comments:

The Long Road to Intellectual and Spiritual Maturity

We enter the world as robust learning machines.  Our eyes are constantly flitting about, picking up minute cues to make sense of our new, expansive environment.  We are exclusively influenced by our surroundings—the sights and sounds of our parents, our siblings, our neighbors, and, later, our childhood friends and teachers.   All this is very subjective and has nothing to do with maturity.  We are simply collecting data, until, through endless days of inculcations, we adopt the family’s value system.

Most of us believe that our values are virtuous.  We believe that our family’s religion is the only true faith.  Or—depending on the family—that violence or bigotry or greed is the answer.  In other words, because our minds are so malleable, so credulous, we are easily duped.  We would like to believe that we chose our life paradigms, but we do not.  They are handed to us.  We have been indoctrinated—sometimes silently, sometimes vociferously—but always inevitably.  If that were not true, women in Texas would be wearing burkas, while their Persian counterparts donned frayed cutoff jeans and cowboy boots.

A value system is based on our experience; as a result they are subjective.  Principles, on the other hand, are based on natural laws; they are objective, self-evident, and immutable.  When our actions separate ourselves from others, when they create resentment, those actions are probably value-driven.  When our actions enrich and diversify relationships, they are likely based on principles.

If we are born into an intellectually and spiritually mature family, our values (how we are raised) and our principles (natural truths) may be one.  But that is rare.

Maturity is the process of moving from a system of values to a system of principles, as witnessed in evolved societies and individuals.

Consider how the American society has matured over the last 300 years.  We have gained ground in discarding such egregious values as slavery, religious intolerance, child labor, sexist language, and the bashing of gays and lesbians.  Of course, greater maturity is needed; there is still a lot of work to be done.  And we have only scratched the surface in prison reform, environmental protection, xenophobia, and jingoism.

We quickly recognize principle-centered maturity in individuals.  We are attracted to them.  They are humble, tolerant, understanding, peace-loving, and equanimous.

But the supremely mature individual has something more.  That person has surrendered the last value stronghold:  The belief that every man and woman is immortal.  That value—held from the dawn of civilization—is derived from sheer existential cowardice.  Immature, value-centered humans cannot bare the angst of their mortality.

Regardless, imagine a world disabused of this last vestige of value-centered hubris.  We would finally realize that the only life we have is here on earth, and that if we are going to make our terrestrial heaven, we had better roll up our selves and get to work.

Value-centered dogma separates one from another; principles bring people together.  It’s self-evident.

Posted by Allen Johnson at 7:43 PM No comments: